Hobson Leavy is thrilled to announce the Seshani Bala has recently joined the firm as General Counsel, effective 16 August 2021. In this role, she leads KPMG’s legal function, guiding the firm on all legal and governance issues. Seshani will report to Risk Management Partner, Paul Herrod and KPMG CEO, Godfrey Boyce. 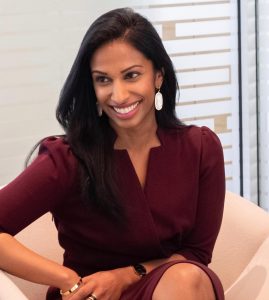 Godfrey Boyce said, “Seshani is an accomplished legal strategist and governance professional and is recognised as such. She has a proven track record leading high-performing teams to support business growth and transformation. We are pleased to add such talent to our leadership team as the firm continues to deliver on its purpose to fuel the prosperity for New Zealanders.”

In 2019, Seshani was recognised in The Legal500’s General Counsel Powerlist as one of Australia’s most innovative and influential in-house lawyers.

Originally from Auckland, New Zealand, Seshani has been building a successful career in Australia over the past 13 years. Prior to KPMG, Seshani was Group Executive and General Counsel at Chartered Accountants Australia and New Zealand. She also held global General Counsel roles for various FMCG and technology companies and worked in private legal practice at Clayton Utz and Bell Gully.

Her experience spans across the specialties of law, governance, and risk management. She has managed global legal operations across various industries, including professional services, technology, FMCG and education. She has also guided cross border mergers, acquisitions, and private equity deals.

Seshani is currently based in Sydney, Australia where she will wait until borders re-open before safely returning to New Zealand where she will be based in the KPMG Auckland office.

Seshani said, “I am humbled by the opportunity to join KPMG New Zealand and to lead the firms’ legal function. I look forward to working with such a highly respected and diverse team and firm. With a strong focus on people, clients, innovative solutions, and commitment to sustainability, it’s exciting to be a part of the firm as it transforms for the future.”

You can read the announcement here.

Hobson Leavy is pleased to announce the appointment of Mike Schubert as the new Chief Executive of Minter Ellison Rudd Watts. Mike …